Five Tibetan schools, namely, TCV Suja, TCV Gopalpur, STS Paonta, CST Darjeeling, CST Bylakuppe and TNMF Clement town have produced cent percent result. This year too, the girls have outperformed boys with about 4.24 per cent. The girls have scored 97.59 per cent while the boys are at 93.35 per cent.

The Gaden Phodrang awardees for the year 2018 from each stream are:

The Department of Education, CTA congratulates all the students who have successfully cleared the AISSCE 2018 and the teachers who have contributed in their success. The one who could not succeed in clearing the exam should not get discouraged as it is temporary and there are many more chances in future. 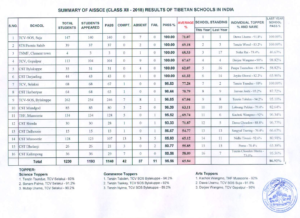